Does this mean I’m “difficult”?

Your result for The Heart Test…

The Pragmatic Heart
Independent, Realistic, Intimate, Explicit
You are the most practical of hearts, the Pragmatic Heart. You very much so value the depth of a relationship, but at the same time you are individualistic, know what you want and don’t settle for anything less, and are practical and reasonable. You like to scrutinize another’s heart for defects and will only settle for what you deem worthy of your love, and you have much love to give. Only those who will respect your analytical nature will you open your heart to, otherwise you are a closed book.

Matches for the Pragmatic Heart:

Your exact opposite is The Bleeding Heart.

Avoid Idealists when possible. They may not be able to relate to your practical nature. Dependents may also trouble you, as you value your independence, but such relationships can work if you are willing to roll up your sleeves and try.

Take The Heart Test at HelloQuizzy

Some of you who have been around for a while, or have been on road trips with me will see this selection and might wonder ‘whassupwiddat?’. I have three points on that, which I’ll get into after an overview for the less initiated.

While we all tend to be music snobs after years of drilling down into many bands and b-sides, exploring the dark inner circles of the old banged-up record store, and raiding estate sale closets for obscure genres that we’d never have found on our own, I have a well-voiced music snob pet peeve for remakes. This is the point where those who have heard my arguments on them have their eyes glaze over, so I’ll put the full arguments on parade in another post.

My reasons for choosing a cover song to be highlighted this week? First, it’s a true cover. The lyrics are blissfully un-messed-with, the notation remains, but the style has been conformed to the artist. When this is done correctly, it can often lend whole new meanings to the same song or arrangement. Second, It’s K’s birthday, and I felt that a girlband that rocks, and that breaks out with intense energy and a fresh outlook was just perfect to celebrate her big 7th. Third, The other song by Odd Girl Out that I was going to use really kicks in at about 27 seconds, so the demo clip you get here would not do it justice.

Odd Girl Out is a post-punk pop all-girl band from Baltimore who sound a lot like Joan Jett or Letters to Cleo. I got the cover of the Bangles’ Eternal Flame on spotlight here as a dedication for the people in our lives who can light up our whole day just by saying our name.

When you guys finish with your personal flashbacks to big hair, DeLoreans, and jokes about Regan’s memory lapses, Hit the “More From This Artist” button to hear clips of some of their other tracks, including a really kicking “Lost in Translation”, a playful nudge at home in “Smalltimore”, and even an ode to “MySpace”.

I saw this quiz over at Delusions and just had to take it. It’s something mcangeli and I ised to talk about once in a while when at work, b/c his kids have very traditional names, and mine don’t. :]

A little while back, I got a comment from Zane over at AmieStreet.com which kicked off an email conversation about this whole Amie Street Music Wednesday meme. Apparently, The crew over at AmieStreet have been noticing a difference in sales and traffic from this bit of blogger activity, and wanted to show some love by sending a slick tee shirt. It is a gray American Apparel Tee with an awesome pinball table theme in pink featuring a bunch of terms used in the amie street community and on the site in general. I really dig it a lot!
Since a post like this is “nothing without pics,” I have a few shots here in my back pocket. (just ignore the pocket lint and empty gum wrapper): 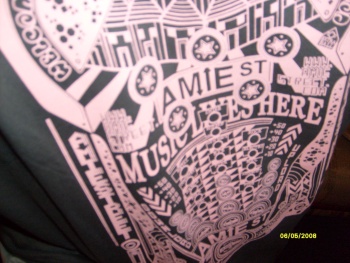 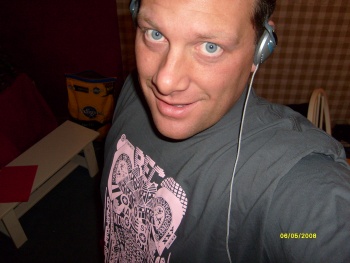 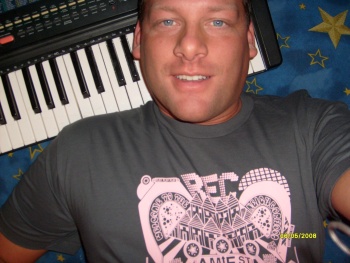 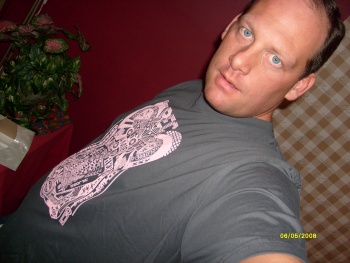 They were out of my size, so this one is really huge now. I’m hoping that it shrinks up a bit when I launder it the first time.
The meme was thought up by Mark over at Mouseclone after some discussions about all the new music we were finding regularly on the AmieStreet website. After putting together the original tracker, he was able to get in touch with some of the development team, who helped in providing the embedded player with the “skinning” options, and then Mark’s work on the WordPress plugin started to really take shape.

I’m glad to see the sites doing well, and have found amiestreet to be a great place as a music consumer to find new and interesting bands, and see it as a hot spot for independent artists to promote and sell their tracks, find new fans, and to connect with the community.

I’ve been holding the cards long enough on Simon Wilcox, and really wanted to share her tracks with you. She’s a singer and songwriter, and *yes* she has a guy name. If any of you were fans of The Kooks, the voice will sound familiar. I really like the fresh intensity of the “Eyes On You” track, and find that this is a good collection of tracks to have for driving or to listen to while indulging the right-brain, whether that be drawing, painting, photoshop work, or creative writing.

Why Amie St. Wednesday? Music is in everyones lives. It surrounds us even when we don.t it. This is a way to discover new artist, and share the artist that you enjoy listening to on AmieStreet.com. If you enjoy the music please support the artist. Amie St. Music Wednesday has no affiliation with AmieStreet.com and the opinion about the music and/or artist is the that of the postie.

This week, I was getting back into some electronica, but kept looking for something that was complex yet danceable. Then I stumbled onto this single by Stella & The Doggs. Stella is notable for her involvement in the Manchester band called Intastella in the early nineties, and refers to this new band and album as “Dark, electro pop”. This track, “Supersize” has interesting lyrics and a building beat that also makes it a good accompaniment to night driving. “Star, you know how gorgeous you are/you lost your mind in my car/star – it’s all too much. More money, more love, more money, more sex. Look what they’ve done/They supersized…” The guitars are prominent without taking the front seat, all while keeping the European feel.

This week, I am talking about a band called “ones and zeroes”, or more exactly, 0N3S & Z3R0S. This three-peice is from Northern California, and has a unique sound, melding the sounds of electronica loops and effects with traditional instrumentation and alt-grunge vocals. After you sample “Mind Run Free”, Click on the “more by this artist” button and make sure to hit “Nothing Left” and “Rose” while you are checking out the 0N3S & Z3R0S.

This week, I wanted to draw some attention to a band called Red Guitar, a band from Kansas City with a folksy rock sound and songwriting combination that makes me think of Tom Petty. They have also been compared to The Fray, Ryan Adams, and Coldplay. Red Guitar is another one of those bands I have found on Amie Street where I purchase all their music, and *almost* feature them for a few weeks in a row, then wait in a vain attempt to choose a single song to highlight. Be sure to listen to “Angel Across The State Line” and “Jump Out On The Water”.
This track, “Let’s Go Out,” is about feeding wanderlust as both an activity for both searching your own soul and for exploring relationships with your travelling companions.
Today, the national average for a gallon of gasoline is at 3.50, and traveling is a headache. Spring is in full bloom, and schools are out in another month. It’s more difficult and expensive to get out and roam, but that spirit is as important as it ever was.